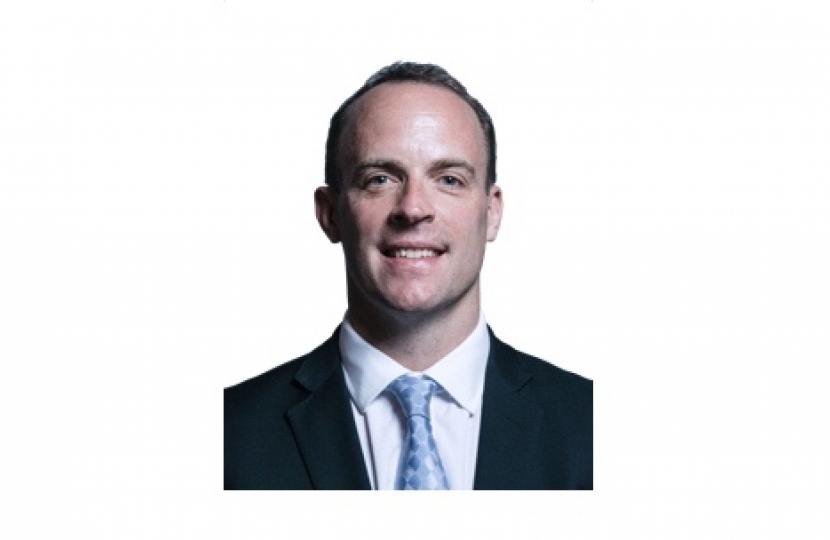 Meet up with members and supporters of the party for a drinks reception, three course dinner and to hear from one the Conservative Party's leading political figures.  We really hope you and your friends can join us for what will be a fun evening.

To buy tickets for the event:

If you wish to reserve a table (ten tickets), please contact Claire on email: claire.guyton@yahoo.co.uk, or telephone 07967 524036.

Dominic is the MP for Esher and Walton. He lives in Thames Ditton, Surrey with his wife Erika and 2 sons. Born and raised in Bucks, he studied law at Oxford and for a Masters at Cambridge, winning the Clive Parry Prize for International Law.

Dom started his career as an international lawyer at Linklaters, a law firm in the City. In 2000, Dom joined the Foreign & Commonwealth Office. He was later posted to The Hague. Dom left the FCO in 2006, and worked for three years as Chief of Staff to respective Shadow Home and Justice Secretaries, advising in the House of Commons on crime, policing, immigration, counterterrorism, human rights and constitutional reform.

On May 6 2010, he was elected MP with 59% of the vote, doubling the Conservative majority, on a turnout of 72%. In 2011, Dom was voted ‘Newcomer of the Year’ at The Spectator’s annual Parliamentarian of the Year Awards. Between 2010 and 2015, he served on the Joint Committee on Human Rights and Education Select Committee. Dom was re-elected in 2015 with an increased majority of 28,616. Dom served as a Justice Minister in David Cameron’s government, and in 2016 was elected by MPs to sit on Parliament’s Committee on Exiting the EU, which scrutinises the government’s approach to Brexit.

First, he could not support the proposed deal due to the regulatory regime proposed for Northern Ireland as it presented a very real threat to the integrity of the UK.

Second, he could not support an indefinite backstop arrangement, where the EU holds a veto our ability to exit.

The website Conservative Home polled Dom on 4th March as being second most likely leader after Boris Johnson in their “Next Tory Leader “ survey.