First elected to the city council in 2015, Ray has formed a strong team with fellow Conservative councillors Chris Harper and Brian Rush, gaining a loyal following across the Stanground South ward.

In 2017 he became deputy Police and Crime Commissioner for Cambridgeshire, subsequently stepping up to acting P&CC when the post became unexpectedly vacant.

At council level his responsibilities include acting as Cabinet Advisor on education, skills, university and children's services, with a special interest in the new technical university which is expected to make a big impact on the local economy while offering unrivalled opportunities to young people locally and further afield. Ray is also chairman of corporate parenting for children in foster care and care leavers, and sits on the county Youth Justice Board.

He told us: "To be a councillor is a privilege, a rewarding role gifted to us by residents who deserve to be represented by people who put their interests first. While we don't always get things right, I love the many positive things about our community and being able to support residents with problems and get them back into a good place." 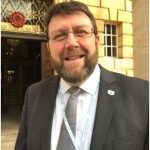 First elected in 2011, Chris Harper has proven himself to be a hard-working councillor happy to 'get stuck in' to the many issues facing the ward on a daily basis to ensure residents can depend upon him and his two fellow Conservative councillors (Brian Rush and Ray Bisby) to protect their intere