Parliamentary Candidate for North West Cambridgeshire
Mr Shailesh Vara has been the Member of Parliament for North West Cambridgeshire constituency since he was first elected in May 2005. As Parliament has been dissolved there are no MPs until after the General Election on 12th December 2019.  Before standing as an MP, Shailesh worked as a solicitor in both London and Hong Kong. He is married with two children and held the position of Justice Minister. He was also Vice-Chairman of the Conservative Party between 2001 and 2005 and Shadow Deputy Leader of the House of Commons during the last parliament.

Shailesh works alongside the local Conservative Party on matters that are affecting our area. He was actively involved with working to improve road safety alongside Forty Foot Drain, has worked closely with Huntingdon’s Jonathan Djanogly to keep Hinchingbrooke Hospital fully open and accessible to local people. He is also very active when it comes to the new Peterborough City Hospital and is striving to ensure that patient care is up to the standards that the public expect, whilst also providing value for money.

Shailesh continues to campaign to help the residents of Hampton and Rural Huntingdonshire, gain access to superfast broadband.

Other issues affecting North West Cambridgeshire since the General Election in 2010 include potential traveller sites and wind farm applications. Shailesh has campaigned hard on these two very difficult issues, delivering leaflets on the subjects, meeting with local residents, putting their views across to Peterborough City and Huntingdonshire District Council; and to the relevant Government Ministers'.

Mr Vara was shown around the large manufacturing factory and learnt of their expansion plans, which will bring more jobs to the region.

Shailesh Vara in the hot seat at Arthur Mellows College

Shailesh Vara MP presented the cups and trophies this weekend at the Ramsey and District Garden Club’s Annual Garden Show, hosted at the Ramsey Rural Museum.

Shailesh Vara MP has today been promoted by the Prime Minister to Minister of State for Northern Ireland, having served as Parliamentary Under Secretary of State in the Department since January of this year. 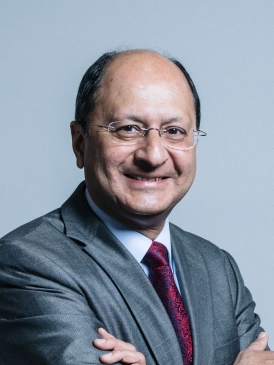