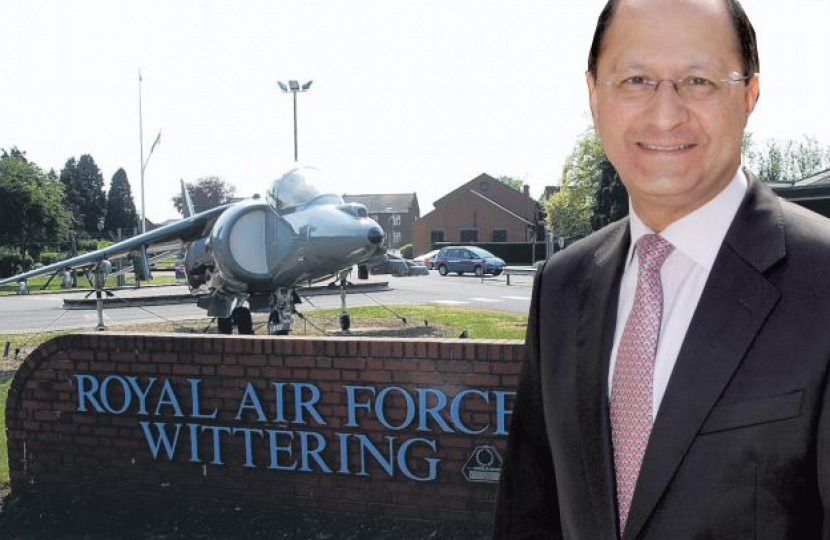 Shailesh Vara, Member of Parliament for North West Cambridgeshire, has welcomed confirmation from the Secretary of State for Defence, Dr Liam Fox, that the Ministry of Defence plans to continue to have a military presence at RAF Wittering. This follows Dr Fox’s statement to the House of Commons on the 18th July 2011.

The base currently hosts RAF personnel and under the new plans may also host Army units in 2015. In a letter to Mr Vara, Dr Fox has said that ‘in addition to the enduring requirement for the current RAF presence, the base is likely to host a [army] unit from Germany.’

Last year, Mr Vara took up RAF Wittering’s case following concerns about the future of the base which arose from the Strategic Defence and Security Review’s announcement that the Harrier Jump Jet would be retired from RAF service. Mr Vara then had meetings with the Defence Secretary to press the case for the base to have continued military use.

“This is very good news from the Defence Secretary and I am pleased that he has listened carefully to the case that I made to him.  During our meetings, I left him in no doubt as to the very strong local feeling for the base to remain.

“I am delighted that there will be a RAF presence at the base and also recognise the economic realities involved, which means that there may well also be an Army unit there from 2015 onwards.”

Want to contact Shailesh about this or another issue?